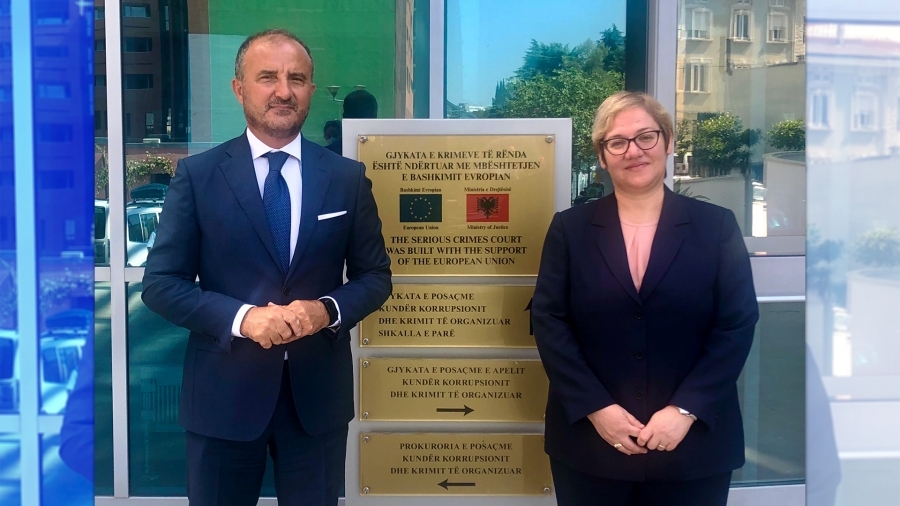 This meeting comes at a curcial moment for the progress of the NBI, which is launching a competition for 60 offcials, who will have a role in this highly important structure of new justice.

“Today I met with NBI Director Ms. Aida Hajnaj to confirm EU support and discuss Bureau’s priorities. Combating organized crime and corruption continues to be a top priority for EU and for Albania on its EU accession path. The work of SPAK (SPO+NBI) is essential to pursue this crucial goal,” wrote Ambassador Soreca on Twitter.

After meeting with Hajnaj on Tuesday, Ambassador Kim wrote on Twitter that Justice Reform will not be quick or easy but is moving forward step by step.

“I met today with the NBI Director Hajnaj and SPO Chief Kraja to reiterate strong U.S support for SPAK. Justice Reform will not be quick or easy, but it is moving forward step by step & must continue so that the people of Albania have justice. Rule of law is also essential for foreign investment,” wrote Ambassador Kim.

Before being appointed as director of the NBI, Aida Hajnaj has had an extensive experience near the Albanian State Police. She was introduced as deputy chief by the General Director of State Police on February 15, 2018.

She passed the vetting process on February 24, 2020 and she was the only female among the four main candidates for NBI.

US Ambassador meets heads of newly established institutions, coming out of the Judicial Reform