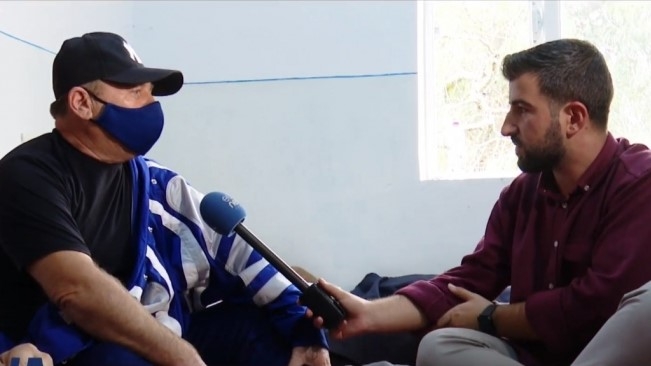 Xhevit Agalliu is a senior worker of the Ballshi oil refinery. He had to enter a hunger strike as the only way left to demand for 26 wage arrears.

“I have been working at the oil refinery in Ballsh for 34 years. I have worked hard for that place and that is why I’m here, along with my friends, to demand the blood and sweat shed for that refinery. We have been poisoned”, says Agalliu.

His wife too used to work at the refinery, but she passed away from multiple complications caused by the dangerous chemicals she had been exposed to, and now Xhevit has to take care of their two children all by himself.

“Children need money. I go home and I can’t buy them bread. Do you understand, not being able to bring bread at home? I lost my wife from the refinery. I am alone now. My children go to school. What do I give them now? I feel ashamed to go home”, pleads Agalliu.

Just like Agalliu, there are many others who haven’t received a pay check in over two years.

“We haven’t received our wages in 25 months. Eleven months since September, when the Tosk Energy company left. There is no directorate here, they tell us to go the private company. We don’t recognize anyone apart from the state”, said Taulant Yzeiri, another oil worker from the Ballshi refinery.

“We don’t know where to go else besides the state. We pray to God but I don’t think he can do much. People are standing between two fires: going home where our families want food and going to the groceries where we’re attacked because we owe them”, says Eduard Haxhiaj.

The President of the Ballsh Refinery Union, Sokol Dautaj, says that this is an inherited problem, as several companies exploit the refinery and then simply leave without paying its workers.

“This story began back in 2015. It’s a problem inherited throughout the years”, says Dautaj.

According to the president of the union, even though there is a final court decision to be paid some of the arrears, it is not enforced by the bailiffs.

The only who can find a solution is the prime minister, says Dautaj.

“The Prime Minister has all the right instances, that’s why he is the executive, at least he can exert some pressure to resolve this problem in a legal manner. Secondly, find a solution for the refinery”, said the union’s president.

Oil workers claim that they will not end the hunger strike until a solution is found.

“All I want is to be paid for the blood and sweat I’ve shed. The hunger strike will go on until self-sacrifice”, declare the oil workers.