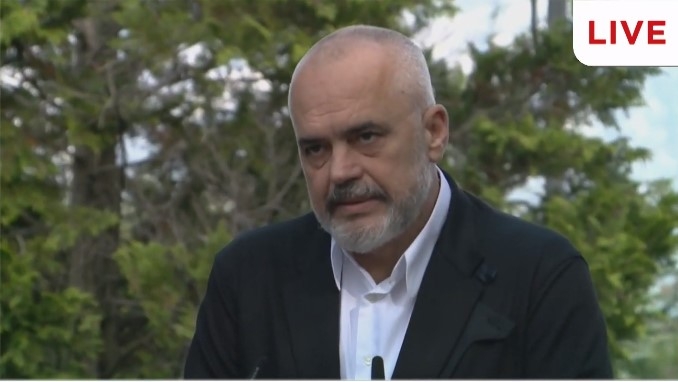 The first five Albanian nationals trapped at the Al-Hol camp in Syria have landed at the Tirana International Airport accompanied by Prime Minister Edi Rama and the Minister of Interior, Sandër Lleshaj.

Floresha Rasha and her three children, Amar, Emel and Hatixhe Raxha and the eleven-year-old Endrit Dumani stepped in Albania after 7 years, where their family members are eagerly waiting to join them.

Their relatives could not miss this much anticipated moment in what turned into a very emotional reunion. The relatives of the 11-year Endrit Dumani after thanking the authorities for rescuing him from the camp had to ask another last request to Albanian authorities: bringing back his sister Eva who is still in Syria.

“Today is like a dream came true for all the family. These seven years we have hoped, we have dreamed and we have endlessly sought for Endri and Eva to return home and now that this day has arrived, it feels a bit unbelievable. It would a have a been a miracle if Eva would have been here too, but for unknown reasons to me and it’s not good for me to discuss about them, we hope that the same operation will be done for Eva too and have her near us as soon as possible”, said a family member from the Dumani family.

“We hope that she (Eva) returns too. We are waiting for her. We wish for her to join I am calling on her to join us if she is seeing this; unite with the family, her brother, her mother. I believe her dearest family members are here,” appealed another family member.

The five Albanian repatriates were accompanied by prime minister Rama, who travelled to Lebanon on Monday.

The prime minister declared to the media that another operation is on the way, but explained that there are several complication as some of the parents are not willing to return to their homeland.

“It’s a complicated process as some radicalized parents are in between, then there are the camp guards and they’re not the same forces as the ones we have been discussing in order to avoid unexpected surprises”, said Rama.

The footage shows the anti-terror special unit entering Al-Hol camp to evacuate the Albanian citizens. Gledis Nano, the anti-terror squad chief confirmed that another rescue operations is due to begin soon.

The five rescues will stay at a military holiday home in Durres, where a special structure will work on integrating them back to society.

During a press conference upon landing, the Prime Minister refused to credit the medias who have been following the case after for the successful operation. He insisted that the intervention of the Albanian government and the cooperation with Lebanese authorities was decisive.

“With all due respect for your job, we weren’t actually expecting to find their locations through the news. We have been working closely with the specialized structures in those territories”, said the Albanian Prime Minister as he reiterated that the operation was successful thanks to the cooperation of Albanian authorities and Lebanese General Abbas Ibrahim.

Unlike the Prime Minister, the head of the anti-terror squad Gledis Nano thanked journalists for showing support towards the work of the Albanian authorities in Syria. He said that apart from security problems, his group had encountered several challenges due to the pandemic.

Neither the Prime Minister nor the head of the anti-terror squad elaborated on the exact number of Albanian citizens in Syria but stressed that the operation is still ongoing.

Euronews Albania journalist, Merin Maçi, said after the conference that “from previous reports it is estimated that there are nearly 70 Albanians stranded in Syrian camps, of which 51 are minors”.

Asked whether the government has a reintegration plan for the four repatriated minors, Rama said that there are several structure in place who will work closely with the relatives, while for those who committed offences they will be put in front of the justice.