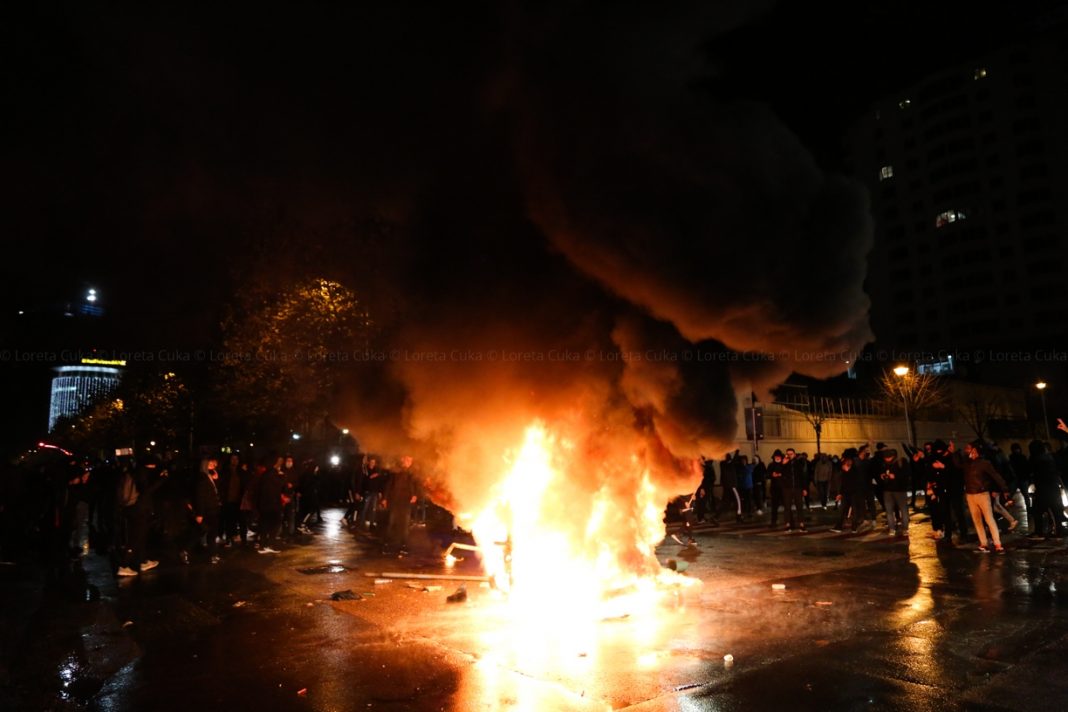 Demonstrated rallied from 6 PM to 9 PM, where several groups violently clashed with the police in sign of anger to the fatal shooting of Klodian Rasha by a police officer in the early hours of Wednesday.

Euronews Albania journalists reporting from the ground, Renald Salianji and Merin Maçi, said that despite the announcement for the resignation of Interior Minister, Sandër Lleshaj, the protest and confrontation between demonstrators and police forces continued.

On Wednesday protesters continuously called for Lleshaj’s resignation amid calls “Down with the Dictatorship”.

The protest was marked by violent acts as rioters threw rocks and firecrackers at state institutions and burned garbage bins, traffic lights and lighting poles.

Demonstrators moved toward the Blloku district, one of the most coveted areas of the capital located some hundred meters away from the Prime Minister’s office, where police forces had been deployed to avoid escalation.

Footage shows violent clashes between the police and rioters, while it has been confirmed that tear gas was thrown to disperse the crowds.

The protest in front of the Interior Ministry escalated again, as rioters began throwing rocks at the police whom in response fired water cannons and tear gas.

This is the second protest that takes place following the fatal shooting of Klodian Rasha by a police officer.

Young people are standing in front of the Ministry of Interior shouting “Down with Dictatorship”.

The protest appeared to have calmed down for several moments as Prime Minister Edi Rama announced the resignation of Interior Minister Lleshaj, but was ignited again as demonstraters headed to the Prime Minister’s office.

Authorities have taken several measures to protect the institutions in case of escalation.

On Wednesday, hundreds of citizens rallied in front of the Prime Minister’s Office and interior ministry in sign of protest, demanding from both to step down, as well as accountability for the fatal shooting of 25-year old Klodian Rasha by a law enforcement officer.

Tensions arose when several rioters tried to break into the Prime Minister’s office and set fire to a nearby decorative Christmas Tree.

As a result, 16 police officers remained injured and one suffered a severe eye injury.

Three protesters have been arrested and four others were prosecuted.