The Socialist Party would win the race, if elections were to take place today 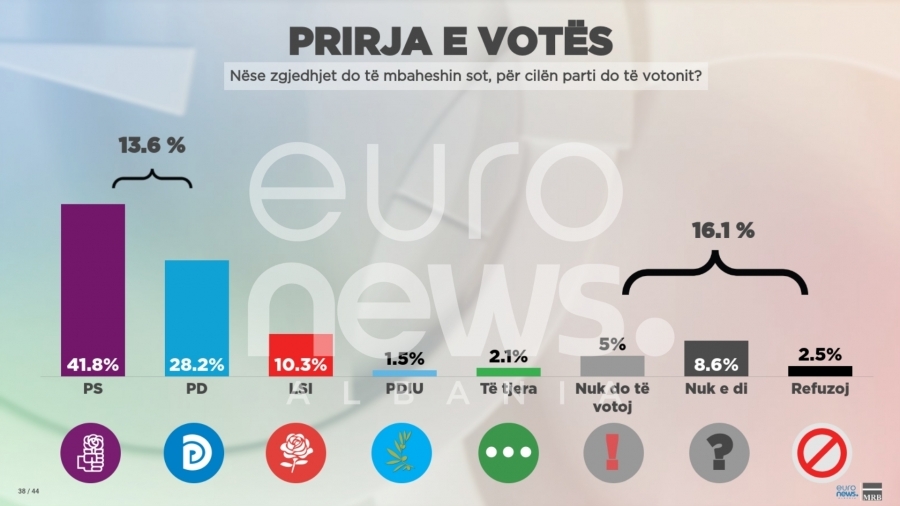 If the Parliamentary elections, due on April 25, were to take place today, 41.8% of Albanians would vote for the Socialist Party, according to a survey conducted by Euronews Albania and the prestigious MRB company.

28.2% would cast their ballot for the Democratic Party, 10.3% for the Socialist Movement for Integration, 1.5% for the Party for Justice, Integration and Unity, and 2.1% for other political parties.

The survey found out that even if all opposition parties would join forces against the Socialists, they would only get 42.7% of the votes, as opposed to the SP receiving 44% of the ballots. The margin is 1.3%.

Unidentified ballots, which refers to those that are undecided, or do not wish to respond is 16.1%. This is a sizeable figure for parties who seek to improve their results in searching for more votes. Fidelity towards the main political parties in Albania remains high.

According to data from the survey, those who voted in favor of a respective party in 2017, will vote again in a higher percentage, around 90% for the SP and DP. The trust of the SMI voters in the 2017 elections appears to have faded after four years, as only 63.2% expressed support.

The majority of Albanians surveyed by Euronews Albania believe that the Socialist Party will win the elections (49.1%).

A smaller proportion (29.6%) believe that the Democratic Party will win, 10.9% think the winner will be the Socialist Movement for Integration, and 9.7% said that they will not vote.

The study covers 12 electoral districts, interviews were taken along the timeframe from December 22, 2020 – January 13, 2021 with multiphase stratified sampling.