Protests against Hydro-power dam in Miredita, residents clash with police 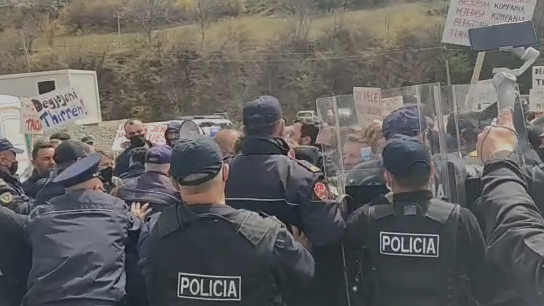 “Can’t have a state, with thieves”. These were the words chanted by dozens of residents in the region of Miredita, who are opposing the construction of a hydro-electric power dam (HEC) and a water factory in the villages of Thirrë and Fan.

Police forces had arrived before the protestors in order to prevent the escalation of the situation even though physical confrontations with citizens also occurred.

Besnik Paci, resident in the area, said for Euronews Albania that this is a criminal act and that residents will take their village’s fate into their own hands.

Citizens from Kosovo and various organizations came to the assistance of residents in Thirre, of Miredita, raising their voices against the destruction of nature.

Even though residents have filed a claim in the General Prosecution office, on the basis of the alleged falsification of their signatures as well as the false pretense of their participation in the meeting with construction firms, no reaction has come from the courts of justice.