Protest concludes as Berisha calls on protesters to disperse

14:24 – Berisha calls on protesters to disperse

The protest to take over the Democratic Party has come to an end at around 14:20 after Sali Berisha called on protesters to disperse.

“In a narco-state, the narco-government and the narco-opposition are the same things. The real opposition is what you saw today standing tall which manifested in a peaceful protest and was met with the harshest forms of violence”, declared the former leader of the Democrats.

Berisha also announced that there will be more protests.

He marched toward the Democratic Party along supporters once again after the police fired tear gas to disperse the crowd.

14:13 – Ervin Salianji posts images from inside the DP

Salianji said that “a solution cannot come from violence”, as today “the lives of Democrats were put in danger”.

A few moments ago, the police fired tear gas to disperse protesters.

Sources told Euronews Albania that the Rapid Intervention Unit plans to intervene again to break away the crowds.

Rapid Intervention Unit barricaded all the streets leading to the DP and other nearby state institutions.

Tirana’s chief of police Lorenc Panganika declared that the intervention came shortly after police were called for help amid life-threatening concerns.

According to him, high-ranking party officials called for help as the crowd stormed the building.

Panganika said that the front yard of the Democratic Party is now being considered a crime scene and that the police will launch an investigation to put in front of justice violent protesters.

13:46 – Berisha: What you saw today is only the first page, protests will continue

He also said that the Democratic Party under the leadership of Basha and the government of Rama are “the same thing”, adding that the “real opposition is what you witnessed today”.

“I assure all Albanians that we will stand undefeated in the values that we cherish and defend”, said Berisha.

13:35 – MPs ask for medical assistance, Grida Duma sends out a message from inside the DP

Medical Emergency Services were dispatched at the Democratic Party to offer medical assistance to the MP’s who are still inside the party’s headquarters.

Grida Duma said she regrets the entire situation and called on protesters to disassociate themselves from Berisha as he is exploiting them.

“Claiming that there was no violence is a grave thing at a time when all MPs are traumatized”, said Duma.

13:18 – Berisha leaves the DP, hits the street along protesters

Former PM Sali Berisha denounced the use of violence by the police during the protest claiming that it was under the command of PM Edi Rama.

DP’s parliamentarians called in the police after protesters stormed the building.

13:00 –President Meta calls on protesters to remain calm amid violent clashes at DP

In a Facebook status, the head of the state urged protesters to stay calm and avoid acts of violence.

“Following closely and with concern, the latest developments at the Democratic Party I emphasize the importance of peaceful protests, as a fundamental right in a democracy, completely legitimate and constitutional that needs to be respected by all. I call on protesters to remain calm and avoid acts of violence, provocations, and unnecessary tensions”, Meta wrote.

The Rapid Intervention Unit approached the building of the Democratic Party and has reportedly fired tear gas to disperse protesters.

Sources confirmed for Euronews Albania to have received an order over the radio to dispatch the Rapid Intervention Unit and RENEA to take the situation under control.

Protesters withdrew after the police intervention, while some of them were handcuffed and taken to the police station. 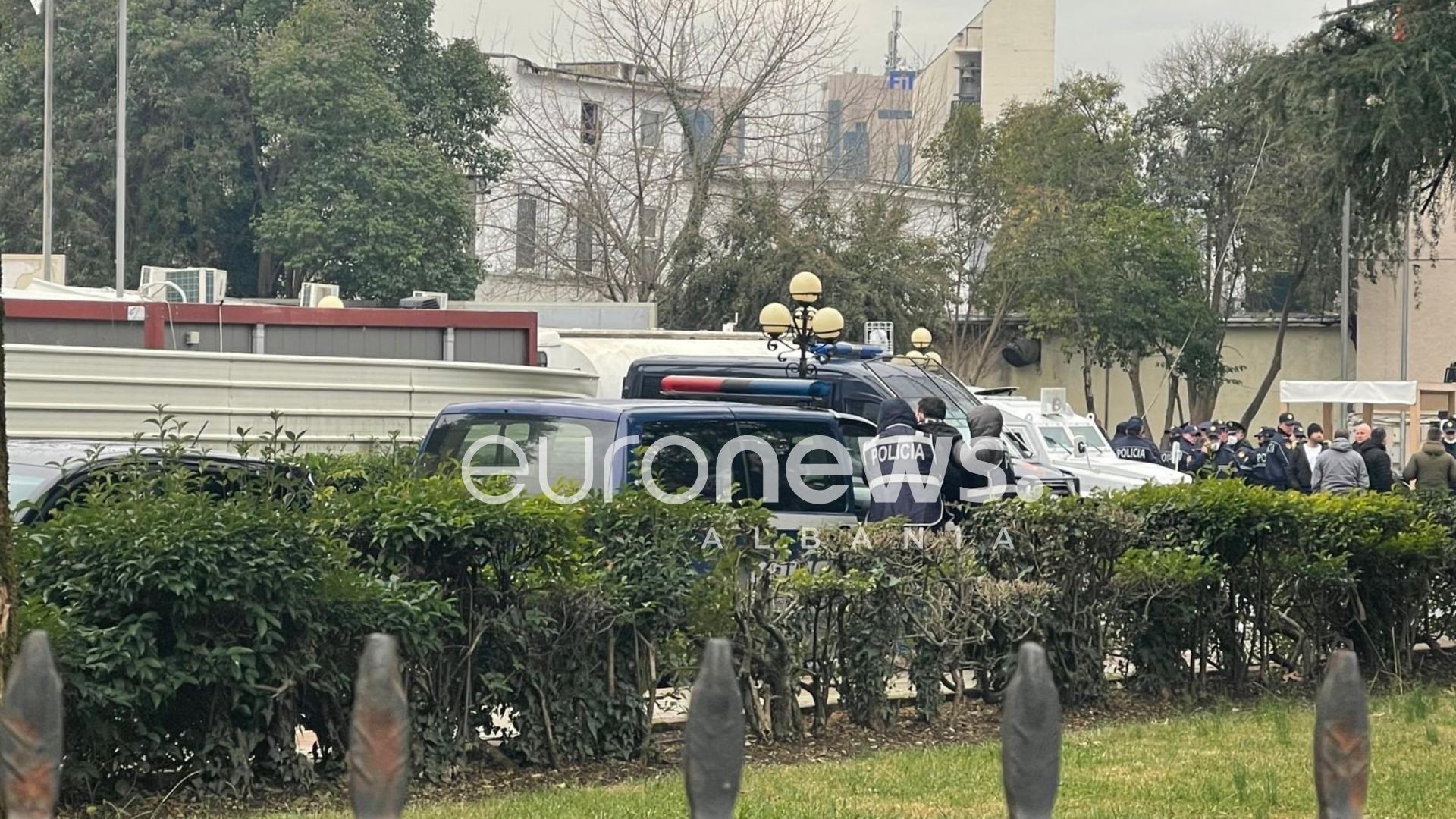 Lulzim Basha and several MPs are still inside the DP.

Meanwhile, protesters have besieged the first floor and are trying to get to the second floor.

12:45 – EU reacts as tensions heighten at the Democratic Party

The delegation of the European Union took it to Twitter to condemn the acts of violence at the headquarters of the Democratic Party and called for restraint.

The European Union Delegation condemns the acts of violence that have taken place today and calls on all actors involved to exercise calm and restraint. There must be no room for violence in politics. 1/3

The State Police ruled out its involvement at the protest stating that it has not fired anything illegal inside the DP.

“The State Police is fully committed to guaranteeing order and calls on citizens to distance themselves from any act of violence as they will be met with the full force of the law”.

12:22 – Protesters use ladders to climb to the second floor

A protester was reportedly hurt after being hit with a hard object.

Berisha called on Basha to refrain from violence after one of the protesters was injured in the head.

12:12 – Protesters were able to break through the doors to the main entrance of the Democratic Party.

However, their efforts to get to the second floor have proven unsuccessful due to the armored doors.

Sali Berisha’s supporters break through the doors to the main entrance of the #DemocraticParty pic.twitter.com/XleGCHAqa0

There are reports of shattered windows and presence of tear gas, but it remains unknown who fired it.

12:02 – US Embassy reacts to the protest at the Democratic Party

In a post shared on Twitter, US Ambassador Yuri Kim called on the organizers of the protest to denounce violence.

The U.S. is deeply concerned with rising tensions at the Democratic Party headquarters building and protestors' use of force. We call on protest organizers to reject violence and exercise calm. Those inciting violence or undermining the rule of law will be held accountable.