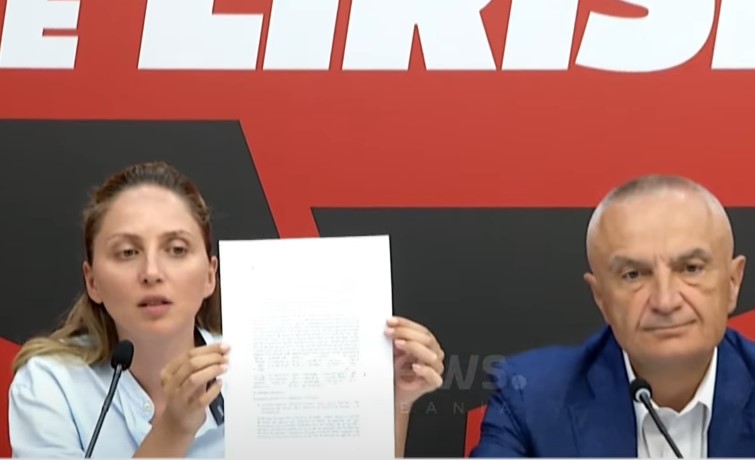 The Freedom Party has published additional facts, which, according to chairman Ilir Meta, prove the discrepancies in the Tirana incinerator affair.

In a statement to the press, Meta said that the company for Tirana’s incinerator has received loans from second-tier banks by leaving public property as collateral.

“Today we will show you how the government, with the head of this whole affair and criminal group, being PM Edi Rama, has made the public property available to this criminal scheme, which has been used as a pawn in various banks, in exchange for the money that is sent across the sea and even further,” argued Meta.

Meanwhile, the coordinator for the fight against corruption in the Freedom Party, Brisida Shehaj claimed that a total of 8 loans were received.

“I want to show you page no. 19 of the contract for the Tirana incinerator; article 522 clearly states that the company has the right to leave guarantees, pledges, and collateral to obtain loans from second-tier banks and this doesn’t just include the property that was given to the concession, but also the concourses and the roadways on the way to the property.

Everything starts from this article. This Tirana company received 8 loans to date, the last one amounting to €8 million euros, which was signed in November 2021. These 8 loans have an outstanding amount of about $16 million dollars,” said Shehaj.

The director of the so-called Office for Kosovo in the Government of Serbia, Petar Petkovic, was banned from visiting Kosovo today. According to local media,...
Read more
Albania

Doctor’s arrest, Duka: Those who arrested him in the afternoon, act as drivers to criminals by nighttime

Doctor Malbor Duka commented on the arrest of resuscitation doctor Fitim Marku, four days ago, after he was allegedly caught red-handed while taking a...
Read more
Albania

Goal for the local elections: The opposition must come out with joint candidates

The chairman of the Freedom Party, Ilir Meta, said that the opposition should come up with common candidates in all the municipalities nationwide, for...
Read more