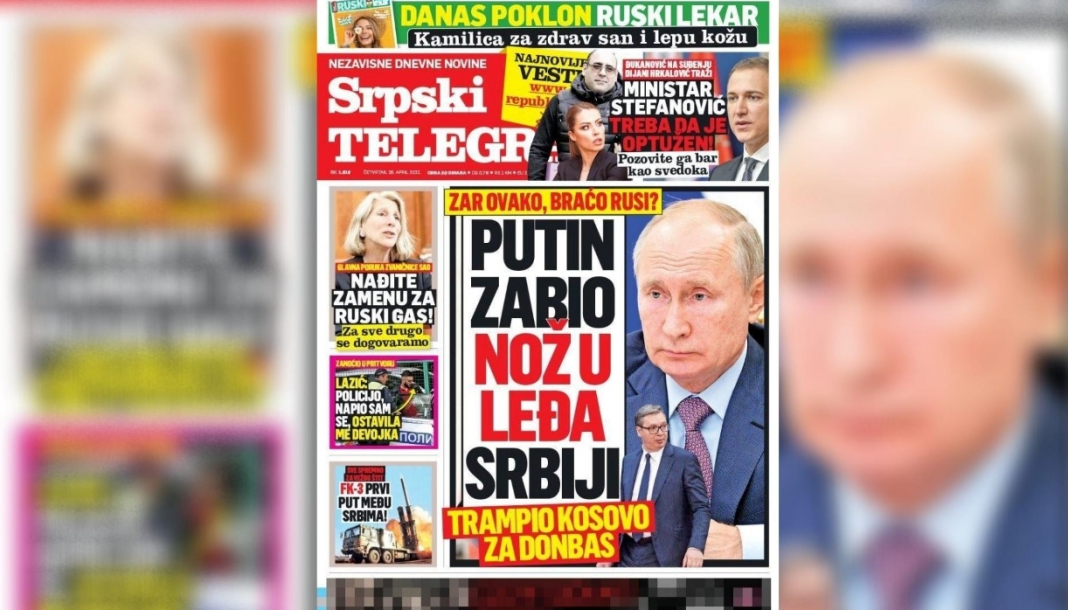 “A knife in the back”, “Are these what Russian brothers are about?”, “Putin recognizes Kosovo”.

These were some of the Thursday headlines on Serbian daily papers after Russian President Vladimir Putin compared the referendum in Crimea and Sevastopol to Kosovo’s proclamation of independence.

“The only distinction is that the decision on Kosovo’s sovereignty was taken by Parliament, while in Crimea and Sevastopol the decision was taken by popular referendum,” Putin said during a meeting with the UN secretary-general Antonio Guterres in Moscow.

It now appears that his statement has triggered a strong reaction in Serbian media.

Blic newspaper is now questioning Serbia’s loyalty toward Putin: “Have we, as a nation, sworn too much to the Russian president: Putin has forgotten Serbs and Kosovo because of the war”.

Another daily paper Srpski Telegraf wrote on Thursday: “Are these what Russian brothers are about? Putin strikes Serbia in the back: He traded Kosovo with Donbas”.

Even Kurir took a jab at Putin in its headline: “Putin defends his interests in Donetsk and Luhansk, without considering Serbia’s position on Kosovo”, emphasizing that “our state must be solely steered by its own national interest”.

Another new Serbian tabloid writes: “A stab in the back: Putin recognizes Kosovo”.

According to Serbian media, Vucic is expected to address the statement made by his Russian counterpart.

351 Ukrainians came to Albania since the start of the war, 170 in Durres

They are living in Durres, but their lives continue to be linked to Ukraine. 88 Ukrainian children go to school in Albania every day. With...
Read more
Balkans

The meeting between chief negotiators from Kosovo and Serbia in Brussels came to a finish this Friday, without being able to come to an...
Read more
Albania

Around 20 thousand passengers are expected to come to Albania to watch the final of the Conference League that will take place at the...
Read more