‘We won’t give up’, Vucic pulls out the map of Kosovo with Serbian flag 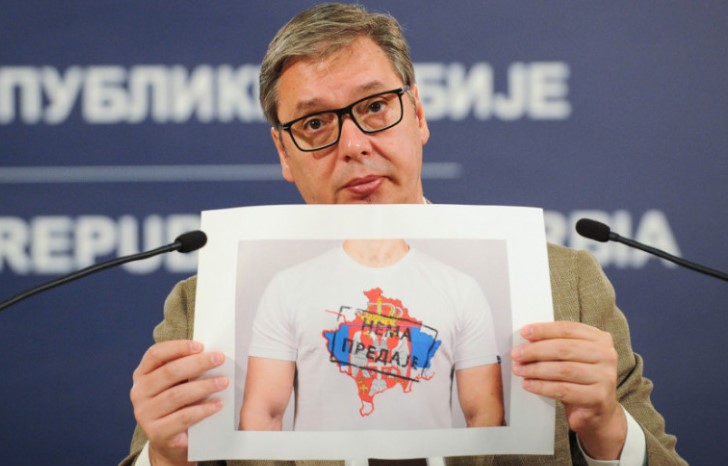 Serbian President Aleksandar Vucic made a statement to the media on Sunday morning in Belgrade, where he spoke about the unresolved issues with Kosovo.

Vucic presented several photos, one of which was a T-shirt with the map of Kosovo and on it the Serbian flag with the inscription ‘нема испоруке’, which means we don’t give up.

During his speech, he said that he has never been in a more complicated and difficult situation with Kosovo than today, writes Euronews Serbia.

According to Vucic, the time has come to demand that Albanians come to their senses and Serbs not react to provocations.

“I am also asking the representatives of powerful countries to pay some attention to international law and the reality on the ground and not allow their protégés to cause conflict. I ask and pray that peace will be preserved. I have held many talks since the evening, especially with Lajcak, if anyone thinks that March 17 can happen again, it won’t happen,” the president said.

Among other things, Vucic described as incomprehensible the decision of the Kosovo government for reciprocity for vehicle license plates and documents.

From August 1 to September 30, 2022, the organization of the process for the registration of illegal number plates in those “RKS” will begin in Kosovo, in all Vehicle Registration Centers.

Also, from Monday, citizens of Serbia who will enter Kosovo will be provided with an ‘entry/exit document’.