EC: Kosovo and Serbia expected to act in line with EU commitments. No EU country has an embassy in Jerusalem 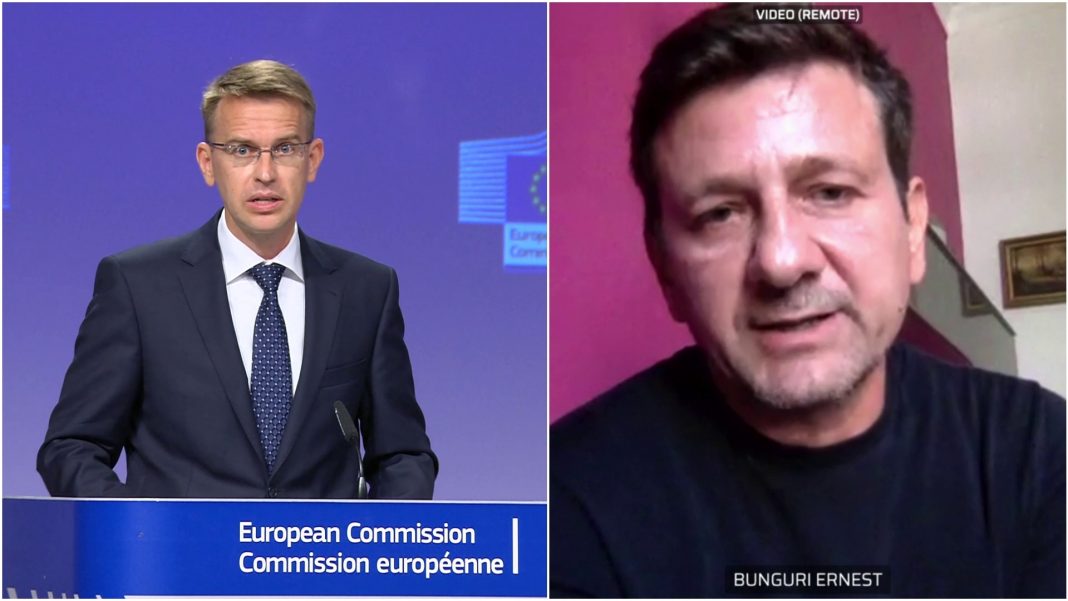 In today’s press conference, the journalist of Euronews Albania in Brussels, Ernest Bunguri, addressed a question to the EC spokesman, Peter Stano, regarding the agreement that Kosovo and Serbia signed in Washington.

Ernest Bunguri: Today we saw a joint statement by the Serbian president and the Kosovar prime minister, reiterating their commitment to the EU. My question is whether Mr. Lajcak was aware of the content that was signed in Washington, and how can that agreement help with the Kosovo-Serbia dialogue that was mediated by the EU. In addition, were both parties (Kosovo and Serbia) aware that by opening embassies in Jerusalem they were expressing a different position from that of the EU?

Stano declared that the event in Washington was individual, for both countries, which had separate agreements with the EU. To what extent that could affect the EU path, that was something that was being discussed in today’s meeting with the EU Special Representative, Miroslav Lajcak.

“We are currently in the talks with both of them and today’s meeting is also part of the agenda which was announced last week, but also a good opportunity for them to tell us and inform us more in how far the commitments taken towards the USA will affect their European ambitions, and how these commitments will help them on the EU path. When it comes to the agenda of what was discussed and agreed and done in the White House, we were informed ahead of the meeting about the issues related to the economic cooperation, economic issues. We were not informed about the other issues which were then tackled in the end”, Stano said.

Regarding the opening of embassies in Jerusalem, Stano said the EU position is clear on the issue. No EU country has an embassy in Jerusalem, and the EU expects Kosovo and Serbia to follow the same line. Although their European perspective has not been undermined, any diplomatic step that would call into question the general stance of the EU on the Jerusalem would cause great concern and regret.

“On the embassies in Jerusalem, these are bilateral commitments that Serbia and Kosovo are taking with Israel. The questions about the motivations and implications should be asked to them. I can only recall that the EU position on moving the embassies in Jerusalem is very well known and has not changed. So, there is no EU member state with an embassy in Jerusalem. The EU delegation is not in Jerusalem. This is in line with the UN Security Council resolution nr.748, from 1980. The EU has repeatedly reaffirmed our commitment to the negotiated and viable two-state solution. Part of this two-negotiated solution is also agreement on final status issues. Jerusalem is one of them. And in our conclusions, from December 2016, the conclusions of the European Council, the heads of state and governments of the EU reiterated that the UE position on Jerusalem remains unchanged. Our position is very clear. A way must be found through negotiations to resolve the status of Jerusalem as the future capital of both states, Israel and Palestine. And the aspirations of both parties, Israeli and Palestinians must be fulfilled.

“Since Kosovo and Serbia identified EU accession as their strategic priority, the EU expects both to act in line with this commitment. The European perspective is not undermined. Serbia is already negotiating its accession. Serbia is therefore expected to align progressively its policies towards third countries with the policies adopted by the European Union. Any diplomatic steps that could call into question the EU’s common position on Jerusalem, are a matter of serious concern and regret”, Stano declared.

Meta warns to sue Austrian journalists who claim he paid 700,000 for picture with Trump

President Ilir Meta said the article published on Austrian newspaper Kronen Zeitung accusing him of paying $700,000 to take a picture with US former...
Read more
Albania

Meta responds Rama: Calls for my investigation aim to divert attention from corruption

An elevator incident that left a patient trapped in the elevator of Mother Theresa hospital on Monday, has brought back safety concerns. Euronews Albania journalist...
Read more