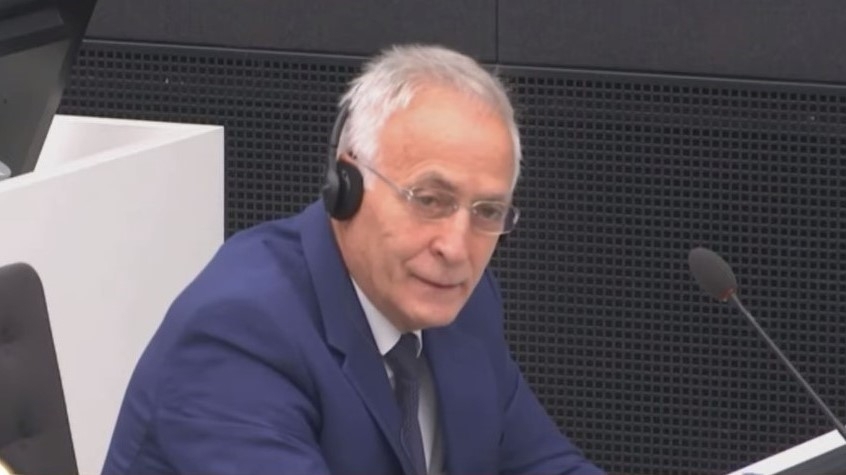 Former Speaker of the Parliament of Kosovo and former spokesperson of the KLA, Jakup Krasniqi, is appearing today before the Hague tribunal in the first judicial session following the confirmation of the indictments on war crimes.

Euronews Albania will report the ‘live’ court hearing from The Hague and any news related to the trial through the reporting of our correspondent in Brussels Ernest Bunguri.

“My name is Jakup Krasniqi. I was born on 1951. I am from Kosovo. I understand and speak Albanian,” Krasniqi said.

The judge of the Specialist Chambers noted that today’s session is not a trial.

“It is my duty to tell the accused the charges against him. He has the right to a defender. Within 30 days he will be notified to declare each point of the indictment. In the end, I will set all the other dates, to perform my duties as a pre-trial judge”, he said.

Krasniqi called the way he was treated “shameful”, adding that his goal was only to fight the enemies who were committing crimes in Kosovo.

“I want to speak of two or three issues, and I want to mention them briefly. Firstly, I was arrested on November,4 2020. They were calling us a ‘joint criminal enterprise’. I want to state that never in my life have I treated any person the way you treated me from the prison building to this one,” Krasniqi said.

The former speaker of parliament denied all allegations and said that he had never pointed a finger at civilians. Krasniqi stressed that injustice is being done towards him, adding that he has only fought politically against Serbia.

“I feel more than good…I am an intellectual, I fought Serbia politically. I have never pointed a finger at the civilian or Serbian population in my life,” he added.

I do not want to go into too much detail, but I want to tell you that I was convicted by the Yugoslav criminal regime in ’81 and ’82 and I was convicted for reading books and because I opposed the regime. They had more right in their accusations then the ones here today.”

“I am aware that I do not need to say it here, but I want to tell you that everything I have done has been public and not only in Albanian, but also in German, English, French, Italian. I was the spokesperson, I gave my voice to the Kosovo Liberation War which was very difficult and in very difficult circumstances, but nevertheless we were determined that we had the right to fight for freedom and of course thanks to that right we also won international support, without which we would have not liberated Kosovo,” Krasniqi added, stressing that none of the offenses mentioned in the indictment are true.

“Although I had a conversation yesterday with the defense lawyer and looked at the main points of the indictment, I said it before and I am saying it again, I do not feel guilty or responsible for any point stated in the indictment. I plead not guilty.”

Former Speaker of the Assembly of Kosovo, Jakup Kransiqi was arrested by EULEX forces 5 days ago.

According to the indictment, the 4 former KLA soldiers are accused of a range of crimes against humanity and war crimes, including murder, enforced disappearance, persecution and torture, committed between March of 1998 and September 1999.

From war commander to state leader, who’s the former President heading to The Hague

Former KLA commanders heading at The Hague to face justice