Kurti meeting with Borrell in Brussels, dialogue with Serbia won’t resume on May 11 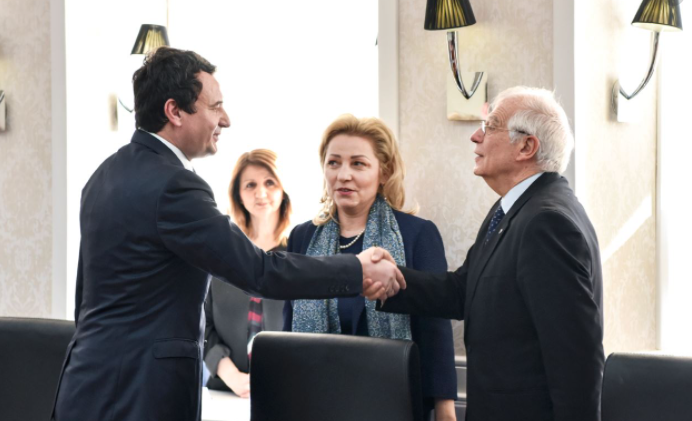 Kosovo’s PM, Albin Kurti concluded his first official visit in Brussels, lacking a pledge to predetermine a date that will mark the recommencement of the dialogue with Serbia, like the EU was hoping for, having previously spoken on a possible date being May 11th.

“We need more information and documents regarding our previous agreements and the process as a whole so that we can be well acquainted and prepared,” stated Albin Kurti.

The Serbian president, Aleksandar Vucic was in Brussels earlier this week and agreed to initiate talks, but during his electoral campaign in the beginning of the year, PM Kurti promised that his priority would be the revival of Kosovo’s economy, vaccination and the battle with unemployment for the youth of Kosovo.

On the other hand, the High Representative of Foreign Politics replied to the accusations that the EU isn’t doing enough.

“I have had enough with this history, saying that we haven’t done enough or helped enough. Our financial support in this process is very high but it’s not being taken into consideration,’ said Josep Borrell.

This week, there were articles from 2 media that were claimed to be newspapers, that said that the governments of EU countries are considering the readjustment of borders for Western Balkans, even though experts deny this.

“We are seeing that many countries are more favored than others in the road to the EU, whereas others are left behind, such as Bosnia or Kosovo. And as the situation continues down this path, there is a gap that needs to be filled by foreign actors, but it’s also because of some ridiculous media, that I hope will disappear and won’t be taken seriously,” highlighted Engjellushe Morina from the European Council for Foreign Relations.

PM Kurti as well as the Chief of Diplomacy for the EU, reemphasized their stance supported by many other countries in the Balkans, that these pseudo-medias aren’t serious and shouldn’t be paid attention to.