Kurti gets awarded the Service Medal of Iowa in the US 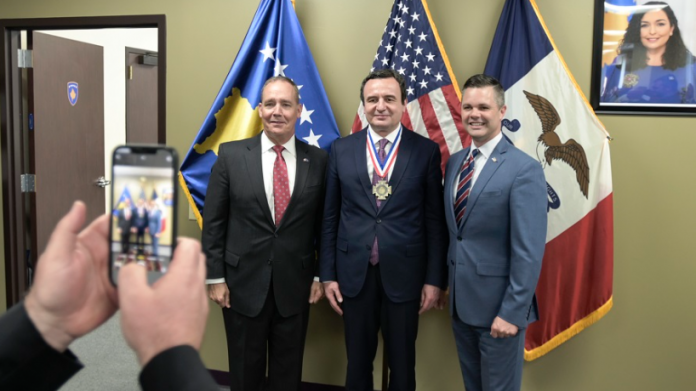 During his official visit to the United States, Kosovo’s PM Albin Kurti was presented with an award by the Iowa Senate.

In the award ceremony, Kurti was presented with the Renowned Service Medal of Iowa State, reports Kosova Press.

The medal was presented to Kurti by senator Zach Nunn.

At the age of 22, Albin Kurti led the resistance movement against the regime of Slobodan Milosevic.

When the Kosovo War began, Kurti was involved in achieving territorial integrity in collaboration with NATO, by resisting Serbia’s attacks as well as helping in the rescue of many Albanian families in Kosovo.

In February 2020, Albin Kurti was elected prime minister of Kosovo and continued his partnership with business, industry and agriculture leaders from Iowa.

Italy encourages the dialogue between Kosovo and Serbia and urges a solution to the dispute. The statement came this Wednesday from the deputy secretary of...
Read more
Albania

COVID-19 daily infections continue to soar, more than half in Tirana

The number of new COVID-19 cases has soared in the last few days. The Ministry of Health said 581 citizens tested positive this Wednesday, of...
Read more