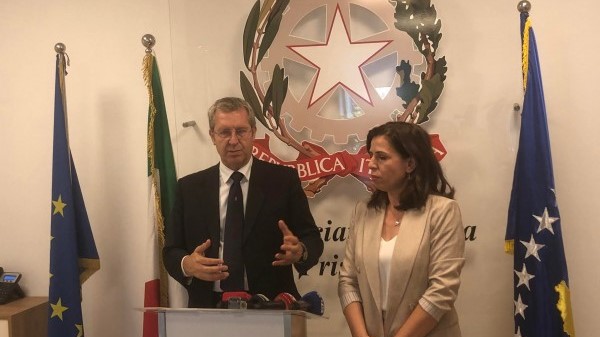 Italy encourages the dialogue between Kosovo and Serbia and urges a solution to the dispute.

The statement came this Wednesday from the deputy secretary of the Italian Ministry of Foreign Affairs, Benedetto Della Vedova during an official visit to Prishtina.

“Regarding the dialogue, we believe in the involvement of the Serb-speaking community in Kosovo. We encourage the dialogue, in the bilateral aspect and in line with the EU support to concentrate on the main points in finding a solution”, he said.

Della Vedova also reiterated Italy’s support for lifting the visa regime for the citizens of Kosovo.

“Italy has always supported and supports visa liberalization for Kosovo. It makes no sense that Kosovo citizens are the only ones that require travel visas in the entire region”, he said.

Della Vedova also met PM Kurti to discuss alignment with the EU on sanctioning Russia over its invasion of Ukraine and share a message that Italy supports the country’s path to the Council of Europe, as well as NATO.