Russia’s interest in the Balkans, Agim Nesho: A political failure of the EU 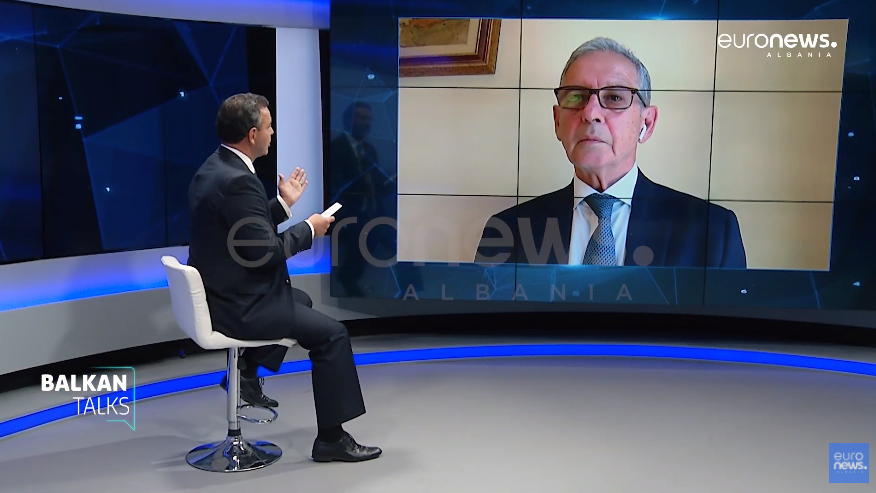 This week’s ‘Balkan Talks’ on Euronews Albania was focused on countries of the Western Balkans and their integration into the European Union.

The efforts are underway when only 20 days ago, two unofficial projects called “nonpaper” documents were published in the media, showing the map of the Balkans readjusted and borders between countries changed.

The former ambassador of Albania in the UN, Agim Nesho spoke about these two approaches, that are being broadcasted hand in hand.

“All chancelleries’ in the world and Foreign Affairs Ministries’ work is based on long-term strategies for the politics they need to apply in various regions around the world. There are specific powers that want to exercise these scenarios in order be taken into consideration by the decisionmakers of the international communities and countries with the most interest are Serbia as well as powers like Russia that want to increase their influence in the Balkans,” stated Nesho.

According to ambassador Nesho the “non-paper” document came up in the public scene, after Russia felt left out in 2000, when the official establishment of borders for the countries of the Western Balkans also took place.

“This project was supported by Russia because they were left out in the big resolution of 2000 and they had continued to have their interests in the region. In 2003, Russian diplomats spoke about these scenarios, that would undo the accordance achieved by European high powers,” -stated the former ambassador.

The former ambassador Nesho, sees Russia’s interest in the Balkans as a complete political failure for the EU.

“This shows that there is a failure of the politics of EU, which before making the platform for the integration of countries of the Western Balkans into the EU, it should have made a political choice. This political choice should be taken into consideration so that these tendencies of countries outside the EU can be pushed away,” stated ambassador Agim Nesho.

The ambassador also stated that Kosovo should insist on becoming a member state of NATO, because Serbia might delay the dialogue process for years.

“Kosovo should insist to enter NATO and not stand behind Vucic. There have been other countries like Israel, that haven’t been fully recognized but, which nonetheless were elevated and gained a lot of respect from other countries. Serbia is situated between the EU and Russia, seeing that it still hasn’t decided whether or not it will continue is path of integration, it might delay the mutual recognition process for years and years,” – stated Nesho.

In regards to the declaration of Commissioner Varhelyi that Albania might be decoupled from North Macedonia, in order to start the accession of negotiations, Nesho stated that this judgment will be made by Germany and France.

“Germany and France are the ones that define what will happen with the process. It’s not the Commissioner, who decides because he is just an employee of the public administration,” he concluded.