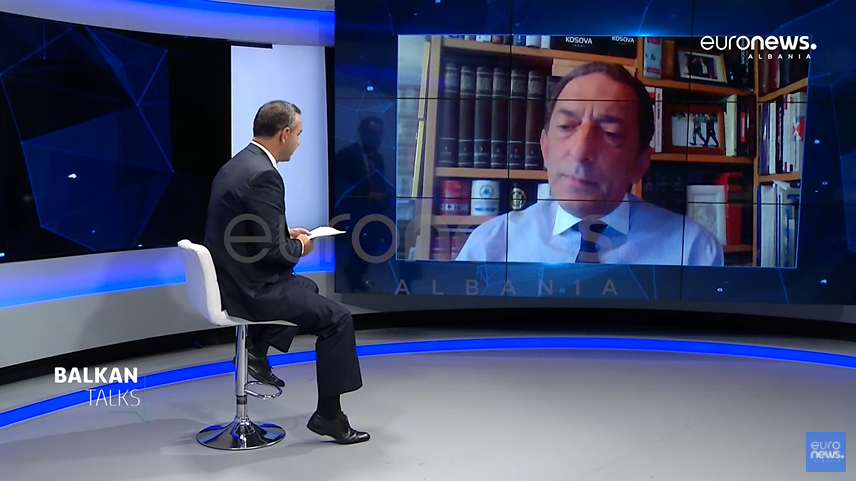 The application of the reciprocity principle on Serbian license plates crossing into the territory of Kosovo led to rising tensions between Pristina and Belgrade, as well as an intervention from top officials in Brussels.

On Balkan Talks, he suggested that if Serbia doesn’t change its outdated mentality, there can be no prosperity for the region.

“Even in the second decade of the 21 Century we have a problem which is generating these crises, and that is Serbia. The Balkans cannot become democratic, civilized, and pro-Western with a Serbian mentality dating from the 19 Century”, he said.

Professor Reka said that Serbian President Aleksandar Vucic is acting similarly to Slobodan Milosevic, which according to him, aspired to unify the Balkans under the umbrella of ex-Yugoslavia.

“When I say that, I mean, that now that the Serbian establishment, led by Vucic, is trying to do what Milosevic also tried to do by the end of ’90s, unifying the Balkans under the Serbian umbrella, but through an invasion, now is doing it with a new strategy, calling it the “Serbian world”, he said.

He said that Kosovo, by applying the reciprocity principle, did what every other sovereign state that respects its own laws would do.

During the interview with Franko Egro, the former minister said that the European Union must urge Serbia to respect the agreement signed in their presence at the roundtable of talks.

“The government of Kosovo did what every sovereign state would do, applying the law within its own territory. The EU, instead of addressing both sides, should turn to Serbia”, he said.

Asked on the messages sent by Kosovo to European chancelleries on enforcing reciprocity, professor Reka argued:

“Except for the technical message, which is over the reciprocity on license plates, reciprocity wasn’t invented by Kosovo, is one of the most common and functional principles in interstate bilateral relations. The government of Kosovo emitted a clear political message to Brussels, telling them that it’s no longer willing to engage in the so-called Brussels dialogue that’s been going on for 10 years, which has taken an asymmetrical shape, and that the government of Kosovo will no longer accept being treated differently from Serbia”, he concluded.