What do Albanians think of the justice reform? 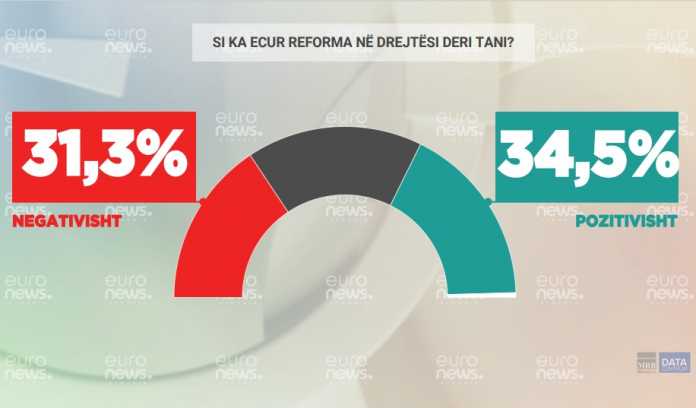 Only 1 in 3 Albanians (34.5%) think that the justice reform has been positive so far.

Nearly just as many citizens (31.4%), have a negative opinion.

Based on the party they voted for in 2021, it seems that 60% of Socialist voters held a positive opinion of the justice reform.

Whereas amongst Democratic voters, more than half (52.6%) hold a negative opinion of the justice reform.

More Albanians think positively of the justice reform this year (34.5%) than they did last year (24.8%).

This rise in the approval rating amongst Albanians as it concerns the justice reform happened across the board affecting both SP and DP voters.

Citizens were also asked regarding the contribution of the political system in the justice reform. The majority (46.9%) thought that the government contributed positively to the reform and (49.9%) were neutral about the opposition’s contribution.

Albanian citizens also held a positive opinion (52.9%) of the US ambassador Yuri Kim’s role in the justice reform.

Findings were retrieved from a poll conducted by Euronews Albania’s Barometer in collaboration with MRB and Data Centrum through 1000 in-person conversations conducted on a national scale from May 23 – June 4.