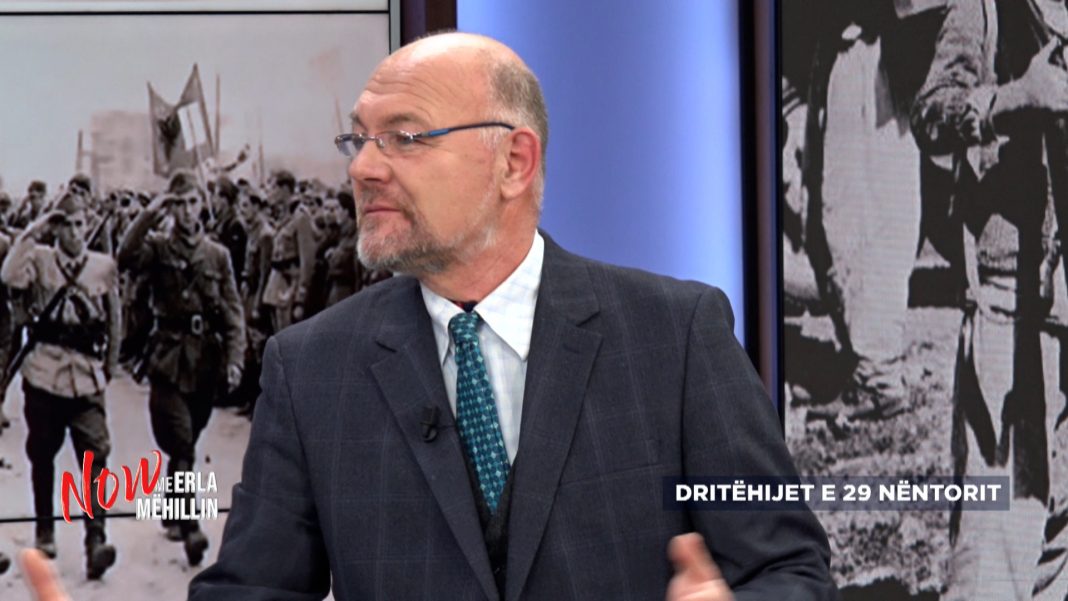 Historian and researcher, Auron Tare said that the ‘division’, which usually characterizes the November 28 and 29 celebrations in our country, is part of the ‘Albanian absurdity’. Tare said during tonight’s ‘NOW’ with Erla Mehili, that another common mistake present around this time of year is that no differentiation is made between the partisans that fought in the Liberation War and the communists that came to power immediately after.

“They [communists] came to power with the help of the Brits and the Americans. They brought them to power. They handed over gold, clothes, ammunition, and hundreds of planes. Enver came to power through their guns. The partisans are not the ones responsible for what would happen to Albania after the war. They weren’t the ones that brought communism to the country. The ones that fought and died weren’t communists, only a small minority was. Four of my grandfathers went to the mountains but none of them was a communist. They went there because they thought they were fighting a war that would liberate the country,” he said.

According to Tare, the way this topic is often treated isn’t serious, especially when it comes to honoring those fallen at war. “All they do is hold a ceremony and broadcast it on television, whilst the Martyrs’ Cemetery is shown no care or respect,” – said Tare.

In addition, Tare said that the ones that fought the war, did a great favor to their country because they protected its territorial integrity up until 1943.

There are documents, Tare said, which show that Churchill promised southern Albania to Greece if they were to participate in the war as their allies.

In addition, he argued that although we need to make certain distinctions and despite the fact that Enver Hoxha did a favor to his country during the war, no one can say that he loved Albania more than Mit’hat Frasheri, even though he chose the wrong side.

Ardit Bido: ‘The debate on November 29 is closed, let’s not fall prey to political traps’

The Director-General of the State Archives, Ardit Bido said during ‘NOW’ that the debate regarding the 29th of November as our National Liberation Day is closed because political forces have agreed to recognize November 29, as the official Day of Liberation.

According to him, the political debate that always erupts during this time of the year is senseless and divisive, which is why it should no longer be made part of the public discussion.

Dorian Koci: During the anti-fascist war in Albania, 2.400 Germans were killed

According to researcher Dorian Koci, 2.400 German soldiers were killed in Albania during the National Liberation War.

In addition, Koci reported on the number of Germans killed in the Balkans, saying that during the great anti-fascist movements that took place in our region at the time, around 105.000 Germans were killed.